Mental Health Awareness: The Five Ways are the Friday Way

Mental health is a critical part of our business. Our purpose at Friday Pulse is to improve wellbeing in the workplace. It’s our reason for being. 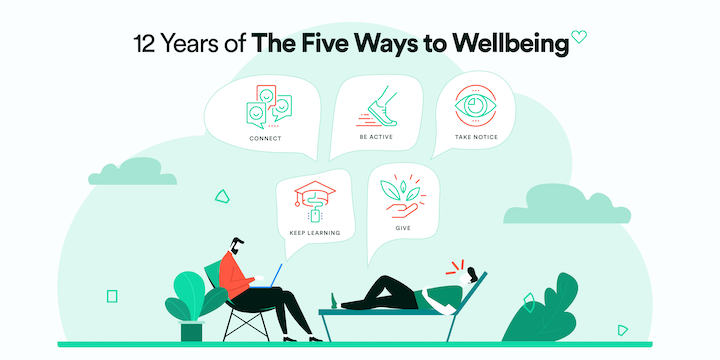 In the current COVID-19 era, employee wellbeing has grown from being a ‘nice to have’ to ‘a must-have’. In fact, it is reported almost 48% of employers have improved their wellbeing strategies since the beginning of the pandemic.

This provides an opportunity for us to reflect on The Five Ways to Wellbeing — how we designed them and their legacy. They are the precursor to The Five Ways to Happiness at Work. They are also a project that we are proud of because of its significant contribution to mental health awareness in the UK. Our work during this project would eventually come to shape Friday Pulse, the direction we take and, ultimately, who we are as a business.

We hope you’ll forgive us a little self-indulgence as we look back on our history.

12 years ago, the UK Government began to push for improved awareness around mental health. It commissioned over 100 separate reports and involved over 300 experts from a wide range of disciplines. During one discussion, our CEO & Founder Nic Marks held a piece of fruit in his hands and said, “We need the mental health equivalent of five-a-day fruit and vegetables.”

And there began a new project for Nic and his long-term collaborator Dr. Jody Aked, Client Success Director at Friday Pulse. The premise? A guide for ordinary people to take actions in their day-to-day lives that would improve their wellbeing. After extensive research and design, and the process of creating a long list of evidence-based actions, The Five Ways to Wellbeing were born:

As well as a report, these five ways were also printed on postcards and distributed freely. You’ll notice that after each phrase/word there is a series of ellipsis (…). In contrast to most messaging from the government at the time, which tended to be prescriptive — telling people what to do— the Five Ways were an invitation to try doing something different. It invited people to connect with others, go for a walk or run, be curious, learn new things, or do something nice for someone else.

“It was important for Jody and me to start where people were. These were things that people could do that didn’t cost money and were in their control.” comments Nic.

That simplicity is especially poignant today when we are staying at home because of COVID-19. Although we currently don’t have the freedom that we are used to, we can still use the Five Ways to improve our wellbeing.

An exercise you can do yourself is to take some time to reflect on each of the five ways in turn. Think about what you could do that help you connect, be active, take notice, keep learning or give. These are all very healthy activities for us to do, and they will help us feel more spontaneous and alive during these difficult times.

The legacy of the Five Ways

Because the Five Ways began as a government project, it ultimately meant that the Crown owned it — officially the Queen — and because of that, anyone could use it. “People could adapt them, and they could travel as an idea. That’s the real strength of the Five Ways” said Nic.

And travel they did.

Over the last 12 years, some form of the Five Ways has been used all around the world, across cultures. A Chinese New Year event in Liverpool. An LGBTQ guide. A Norwegian kindergarten. A Maori translation in New Zealand. Because no one had to ask for permission to use it, communities have picked it up and used. They have been an important part of a growing global awareness that people’s mental health matters just as much as their physical health.

In the last three months, the COVID-19 pandemic has hugely accelerated this process. There is wide recognition that this is not only a health crisis but also a mental health one too. 42% of organisations now have plans to alter their benefit programmes, and 28% of employers are actively taking measures to reduce employee anxiety.

Politicians, public health officials and business leaders are all acutely aware that there are unprecedented stresses and strains on people. Tech companies like Google and Facebook are allowing their employees to work from home for the rest of the year, or even indefinitely. Social media giant Twitter told its 5,000 employees last week that they would have the option of working remotely permanently.

The Five Ways, even though they were created over a decade ago, are still out there being used. Both the content and the style of their messaging is recognisable in the most recent public mental health advice from the NHS.

“Ultimately, this is the biggest compliment – to have people use it. That brings us the most joy.”

That desire for utility is what drives the founders of Friday Pulse. From the Five Ways, the first product Friday designed was the Happiness at Work Survey. It had 40 questions, and when Nic apologised to an organisational consultancy they were working with for how complicated it was they said, “Excellent, we can charge more money.”

“That was the wrong take. I immediately knew we had more work to do as we wanted to make something simple and easy to understand. And most of all, it had to be transformative.” said Nic.

Behind the design of the Friday Pulse platform is a sincere desire to empower senior and team leaders to do a good job. Much like how the Five Ways were designed for people to take control of their own lives and take action, Friday Pulse is for companies to take control of their own culture, and look after their employees’ mental health by regularly looking at their own wellbeing data and acting on the insights it provides.

Today, the Five Ways are the Friday Way.

“You don’t need an expensive consultant. You just need good data so you can see for yourself what you need to do.”